Throughout my weekend at the Mondrian London, I managed to sneak in a meal or drink at all three of their charming establishments. Free breakfast (with a view of the Thames!) is always a bonus. The pretty lattes were delivered quickly from the yellow submarine bar to table.

The breakfast was a buffet that was pretty standard, but delicious. A full English breakfast buffet style was great for those of us skipping gross baked beans in the morning. And who can resist a croissant? Other varieties were available as well, but I stayed purist with a plain.

Next up was the rooftop, Rumpus Room. I’ve visited the Rumpus Room a few times now and it has always been packed, including my 7PM visit on a Saturday night. The space is small, but with intimate seating arrangement to accommodate many groups – engagement parties and the like. I did sneak out onto the terrace to capture a few shots. 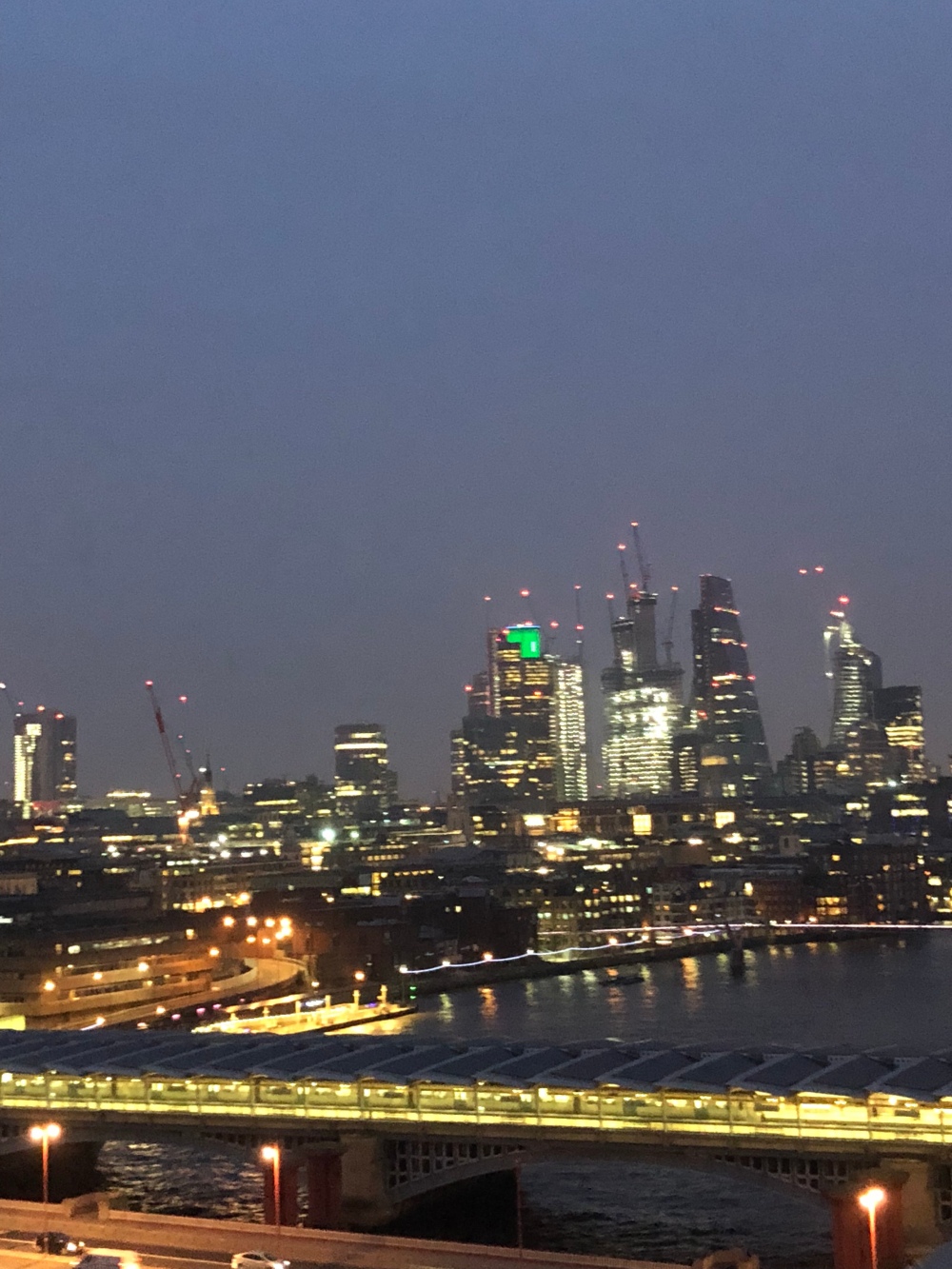 Downstairs, is a much better bar, Dandelyan.

Dandelyan is large, sits on the Thames level and had a fun DJ both nights I visited. Saturday night was packed and I had a quick nip at the bar. Sunday was much less so. I snuggled into a massive chair, enjoyed the beats of an old school hip-hop DJ (who had a much cooler hat than moi), and read a book while drinking through my daily food and beverage credit. Yes, you can do both at once….

The menu is always inventive and changes seasonally. Since I was in London and still wearing a wool coat and hat, I opted for this festive tiki concoction.

Finally, there is the Sea Containers restaurant – the same space as breakfast. Saturday evening after a long haul flight and walking 21,000 steps, I opted to just grab a bite at the hotel. I wish I’d sat at the bar, but I opted for a table and possibly the slowest service of all times. Not sure if it was because I was a table for one and only ordering appetizers, but the speed was ridiculous, even to get a glass of wine. The table next to me was equally as annoyed. We came to learn that their ordering system was down on a packed Saturday night. Very annoying in the moment, but I scored a few complimentary items from the ordeal.

I tried the charred shishito peppers to start. They were OK. Desperately needed salt and there were SO many of them. I wish someone would say, hey I notice you’re one lady, unless you plan on eating 30 peppers, maybe try something else? Or hey, I’m cool so I’ll bring you two from the kitchen as a nice gesture. That’s really about all I needed. So I setteled on probably 15 of the 30….

In the mood for fresh, I opted for this eggplant dish next. It looks like a fun pizza or something, but it is roasted eggplant. A beautiful presentation of absolute mush. No crackers to spread this on, it was just very odd. Do not order.

Finally, there was the crab and avocado toast. This was good, but didn’t blow my mind. I did eat it all.

Totally stuffed from lingering over a mediocre meal, my waiter was sweet enough to bring me a complimentary piece of lemon raspberry pie from Lily Vanilli. This was plastered all over the restaurant’s IG account a week prior for Easter, so I’m certain this was a leftover. The gesture was nice, but again, concluded this sort of odd experience in a similar manner.

In conclusion, the Mondrian is great. Dandelyan is exceptional, and Rumpus Room makes for a nice view. Skip Sea Containers unless brekky is included in your room rate, you’ll thank me later.