Hi Everyone! It’s your boy, Walter, here to fill you in on all things Christmas. You see, Aunt Lauren can’t really be trusted to run a blog since she’s perpetually out of town. So, she paid me tons of money to fill you in on the events!

My family and I flew all the way from Indiana to North Carolina. We had to be awake from like 3AM or something ridiculous. I was a really good boy and got to ride 1,000 escalators in the airport. It was super cool!

That night, we had the first of many family dinners. I gave Aunt Lauren lots of hugs and refused to high five her companion, a Mr. Jonathan. Stranger, danger, son. We had lasagna and Grammy was unaware that the oven and air conditioner were on the fritz in the new house. Not yet, anyway.

The next day Aunt Lauren went to work so I had to hang with all of the adults which was OK. Then Grammy made me get all dressed up and wear this dumb hat to take photos. I’m not really an elf. 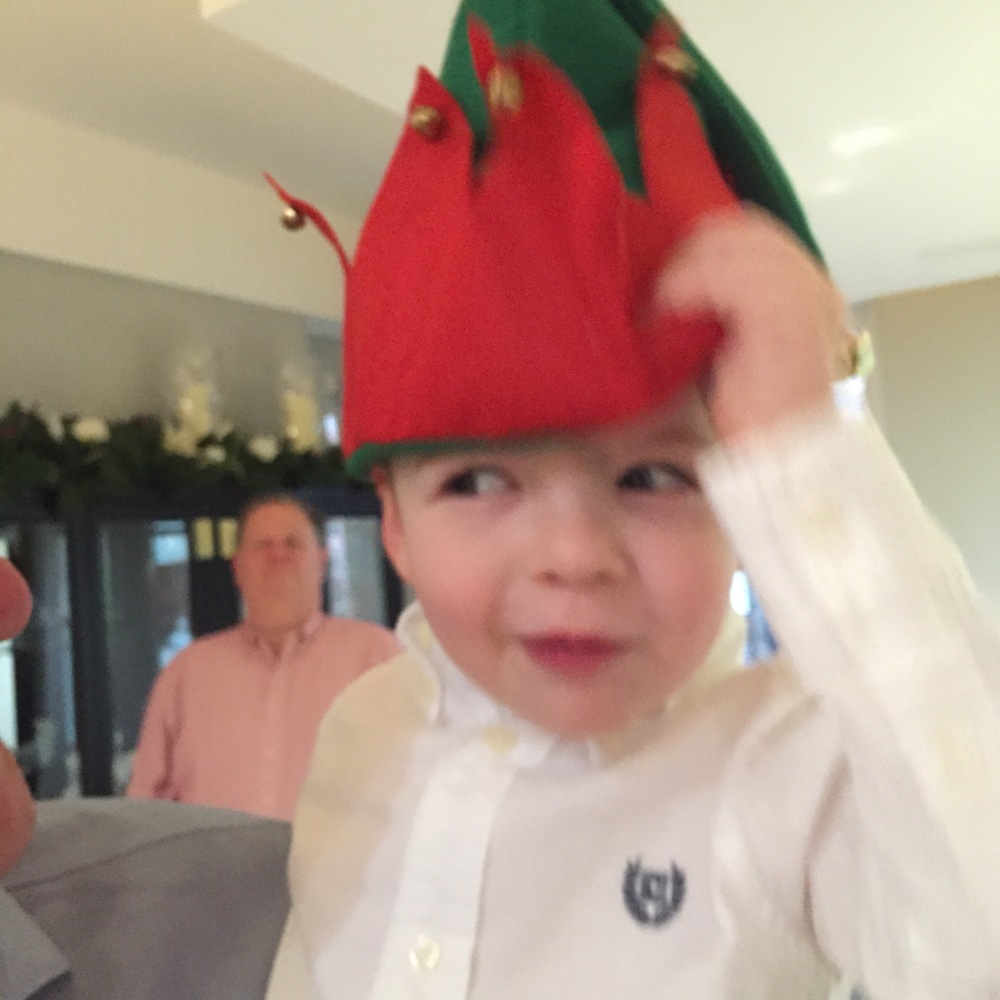 Enter Christmas Eve and Tom Brady. Tom Brady is a pesky golden retriever. I prefer our online relationship because he is crazy hyper. He is only quiet when eating cookies as seen here. Good boy, Tom Brady. He whipped me with his tail and wanted to lick me, but he was just toooooo crazy.

After I went to sleep Tom Brady came inside and watched Aunt Lauren play charades.

Aunt Lauren likes to cuddle so she let Tom Brady on the bed where he isn’t usually allowed, a Christmas miracle!

Finally, it was Christmas! I woke up and opened TONS of presents. It was exhausting! All I wanted to do was play with my train. Aunt Lauren taught me this cool game called, “Fire,” pronounced “Fiyaaaah,” like the time I yelled that at a crowded restaurant. What you do is climb on the train backwards and AL and I yell, “Ready, Aim, Fire!” and I run down the track into the bathroom. Sometimes we mark our progress with lines in the carpet so you know how you can improve, like in a Six Sigma experiment….Merry Christmas!

Dad and I dressed alike and read some of my new books, then it was time to go home. Alice was asleep for most of this blog. See you soon, guys!