First stop, by accident walking through the west Loop was the always famous, Grant Achatz’s, Blackbird. We walked right up on a Friday night and scored an outside table for an oddly fateful first course. Underdressed and overly hungry, but pacing ourselves to make it to as many restaurants as possible, I think we pissed off the waiter a bit. Although after letting him up sell us on a bottle of wine and telling him of our restaurant hopping plan, he was most friendly and even offered up a few points of interest.

We drank something crisp, white and French. Always a win. We ordered scallops with foie gras torchons, strawberries, and watermelon radishes. The amount foie made the dish a bit too rich, but it was still pretty tasty.

The other dish I failed to photo as it looked like a big bowl of green soup. It was really the most tender goat with chopped pistachios and some magical green sauce. A sucker for anything crunchy, I’d died and gone to heaven. The best thing I ate all weekend I failed to  photo. Damnit. 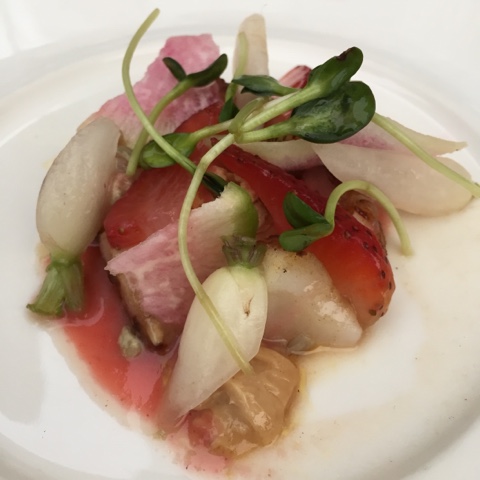 We hit a few other bars, Maude’s Liquor Bar for aviation cocktails, Nelcôtte for some douchy Friday night vibe, and finally some nameless joint around the corner that gave me a snow cone made of limoncello. It sounds great in theory, but I needed food not phallic looking digestifs at this point. Bad life plan. 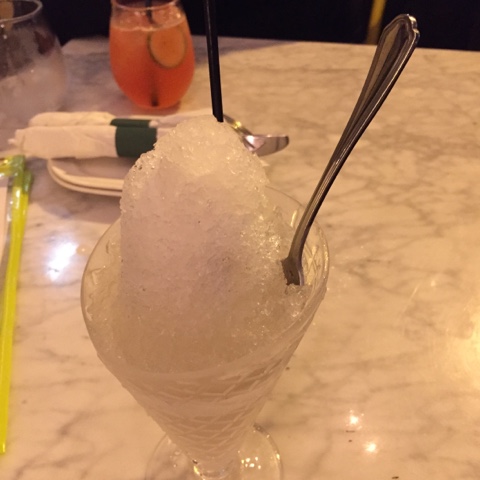 Finally, we made it to the reknowned by everyone, Stephanie Izard’s, Girl and the Goat. The wait was ages, but we managed to beat out our 11:30 dinner reservation by being vultures to bar seating. We won a pair and enjoyed our people watching at this hip, dark bar. 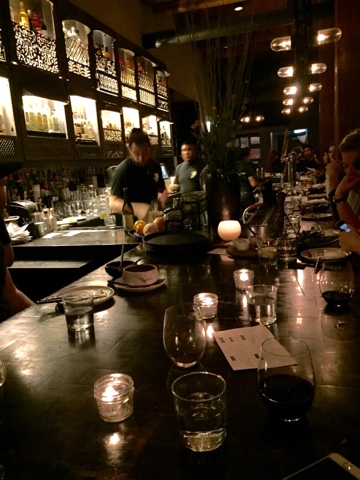 We started off with oysters and to my insistence, champagne, as its sacraligious not to drink it alongside. We were bummed the oysters were baked, but the bacon added an interesting kick. Next time, I’d say keep the shellfish out of the fire and tell the barman to stop pushing sparkling rosé, sometimes the best things in life are simple and I’ll choose a brut any day. 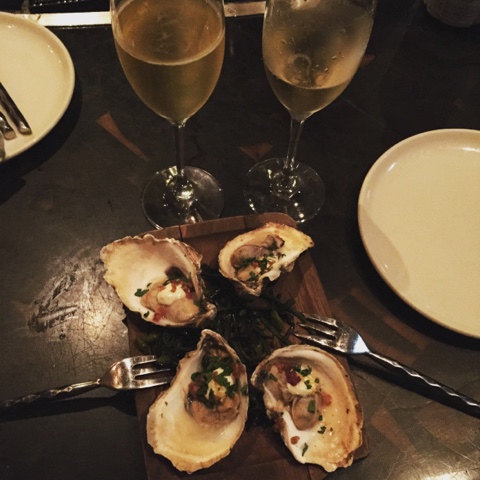 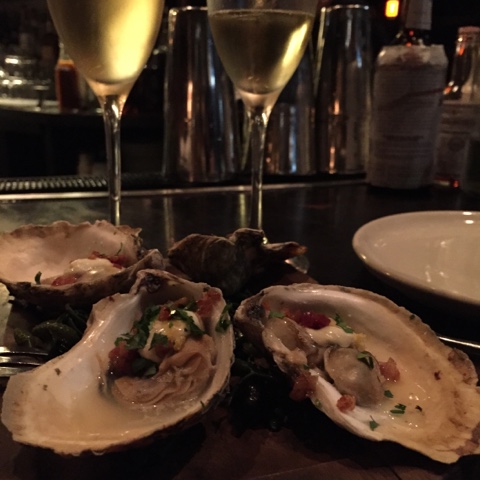 We had grilled octopus, a favourite of mine. Again, it was covered in bacon, asparagus, radishes, and nuts. Lots happening here. 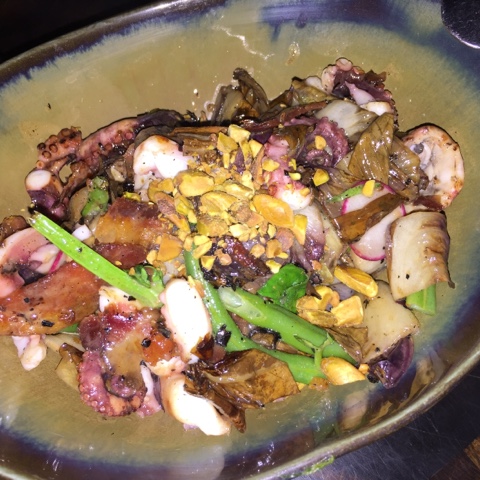 We also ordered some saucy chicken which looks gross in the photo, but I promise was delicious. More bacon here. Not pictured is cauliflower and the pigs head we had to cancel because we were so full of bacon. Overall, I’d say good but overhyped, glad I tried it, no reason to return. Also, the name should be changed to Girl and the Bacon Slab. 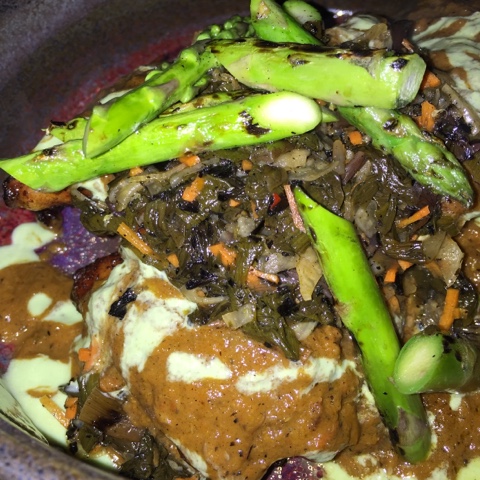 After sleeping off some calories and a day of travel, we met up with the bestie for a light brunch at Mercadito, pictured below. We split steak and eggs, chiquales, shrimp tacos, and a mess of tequila drinks. Poor Chap, the bestie and I hadn’t seen each other in months, a thousand things had happened and he didn’t have much chance to get a word in edgewise. Hopefully, he wasn’t too traumatised. 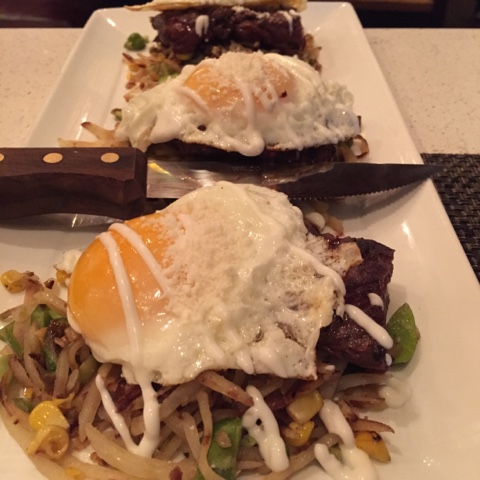 The Chap and I attempted to walk off a calorie or two and strolled around River North and Michigan Avenue. The afternoon was surprisingly gorgeous although the weather called for rain, so we decided to see how much of a bar tab we could rack up while fancy people watching on top of the Penninsula hotel. 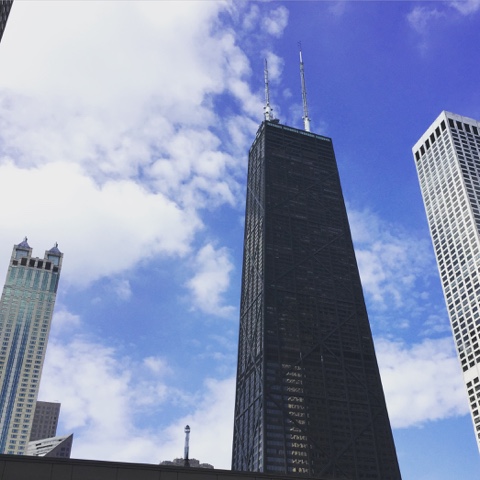 Everyone knows that champagne drinking fuels the need for more champagne, so I stopped into the old standby, Pops!, next door to our hotel and grabbed a grower/producer bottle of Jean Vesselle. I’d only had the house’s rosé wine before, so I was excited to try and it delivered. 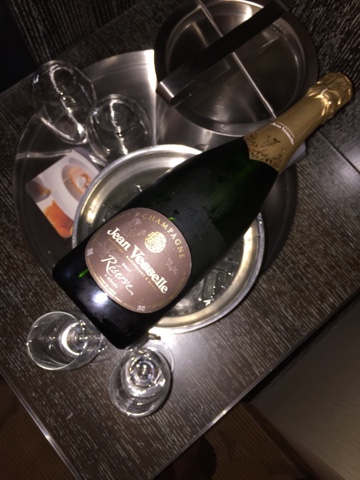 The Chap and I had good reason to rise from our champagne induced nap- dinner at Le Colonial and the late show at Second City. Pretty happy with our corner booth locale, the perfect venue for fancy jewel and handbag stalking. That part was all the Chap of courseAgain, I’m not even going to show the food photos I attempted, as I really need to work on my iPhone photography skills, especially when I only realise I should be snapping when we are already mid meal. I attest to my shrimp and asparagus sautè, of which I ate every last bite. The Chap enjoyed a bouillabaisse that included every fish in the sea. We capped the night with gorgeous Vietnemese coffees, again who’s stripey appearance I need a picture of. Total photography fail of a day.

Don’t worry, when it’s all overpriced champagne and fancy restaurants, I can’t be bothered to commemorate a few moments of fun…but when it’s schwag beer in plastic cups…I’m all over it.

Sunday brought another gorgeous afternoon and a trip to the Cubs game. I insisted we stop at perhaps my all time favourite dive bar, Slugger’s, where the beer is warm and the batting cages (in the bar!) are even warmer. We stuck to skeeball. 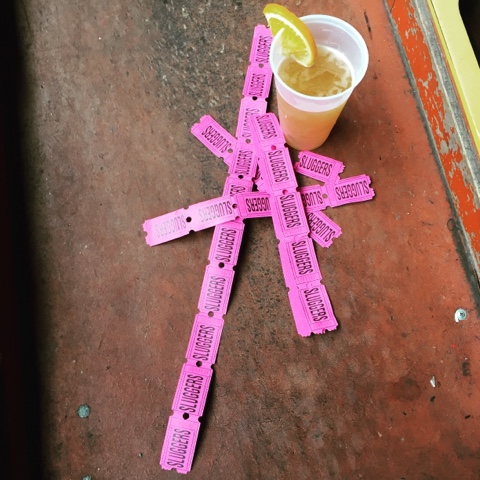 We didn’t even earn enough tickets for a prize, so the 14 year old working the bar took pity on me and handed me this plastic chicken. Score. 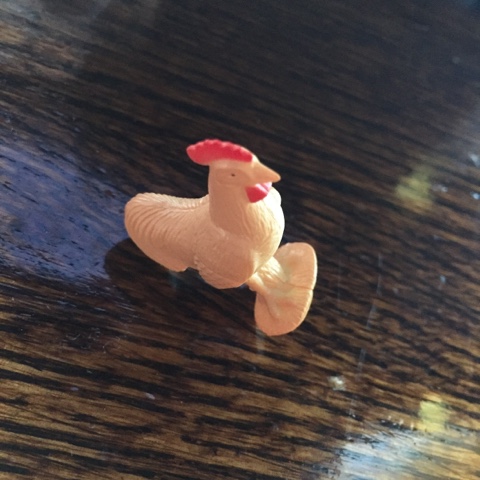 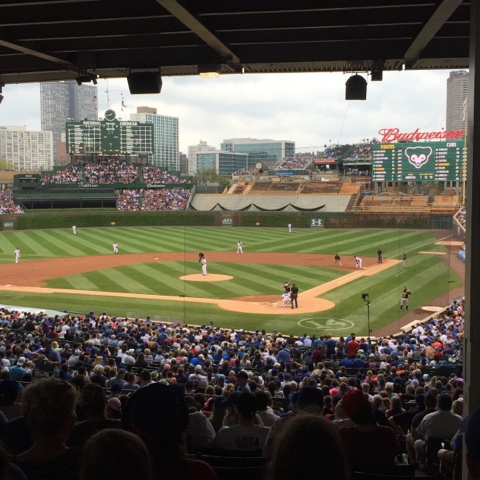 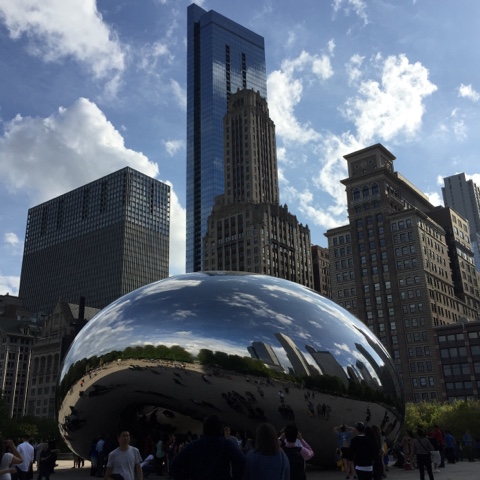 Beautiful Chicago from the Art Institute. 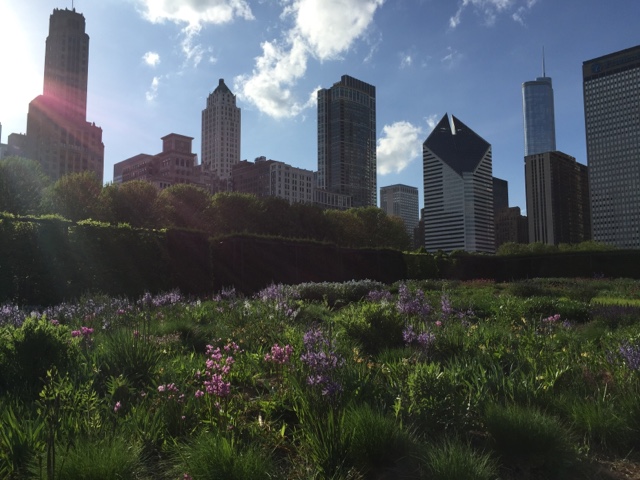 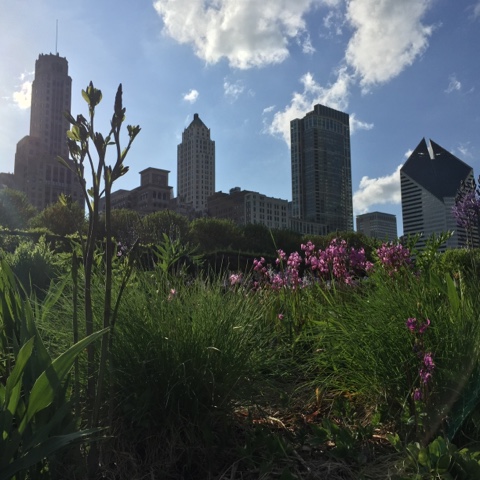 Since we are gluttons for gluttony, we walked back through the Loop to the West Loop so that we could eat at the restaurants we’d missed Friday. Thank goodness we logged ten miles walking this day.

First stop, RM Champagne Bar. Three rounds of Billecart-Salmon never killed anyone, plus I was able to photograph all of the vintage, cute French stuff like this garage door I need for my garden. 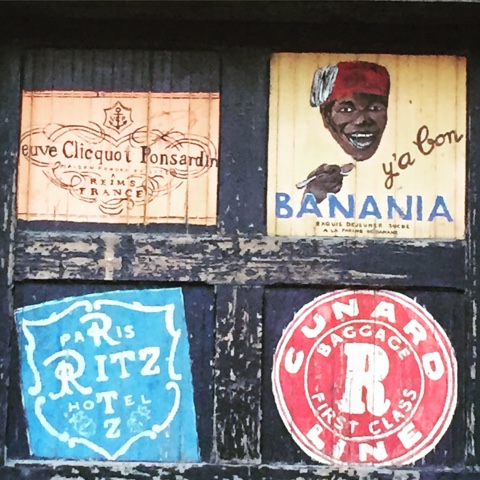 We had an appetiser at Little Goat, sister to Girl and Goat. Meh. We scored great seats at the end of the bar and enjoyed watching the kitchen work to old school hip hop. Hemingway daiquiris were flowing and I was one happy cat. 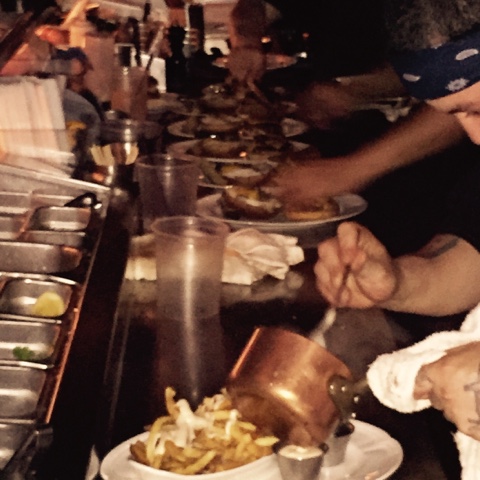 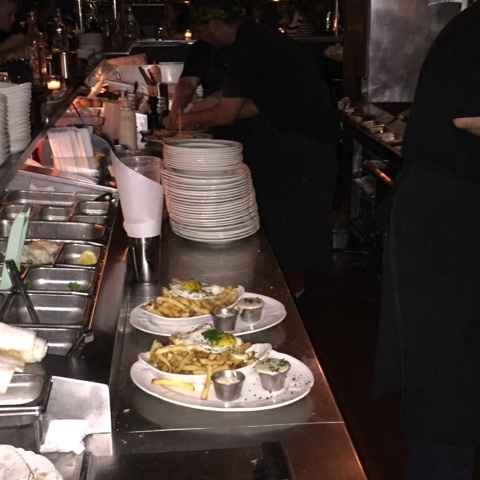 Finally, this burger we’d heard so much about had arrived! Burger, American cheese, the thickest cut bacon I’d ever seen, and runny egg on a massive bun. 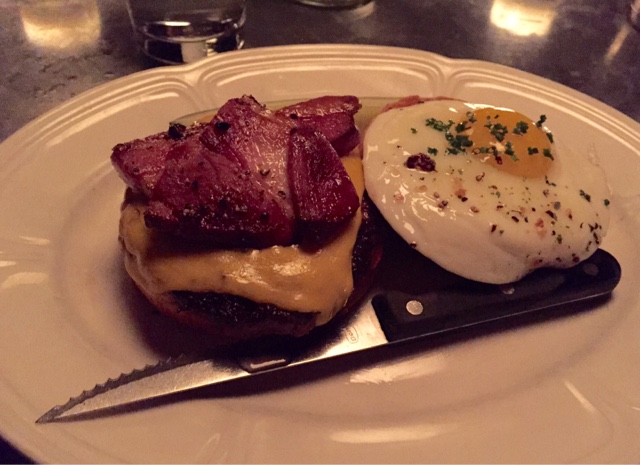 Thankfully, we were splitting this, but even that proved too rich for me so I ate my way through the fries and garlic aioli which were incredible, so naturally not pictured here. 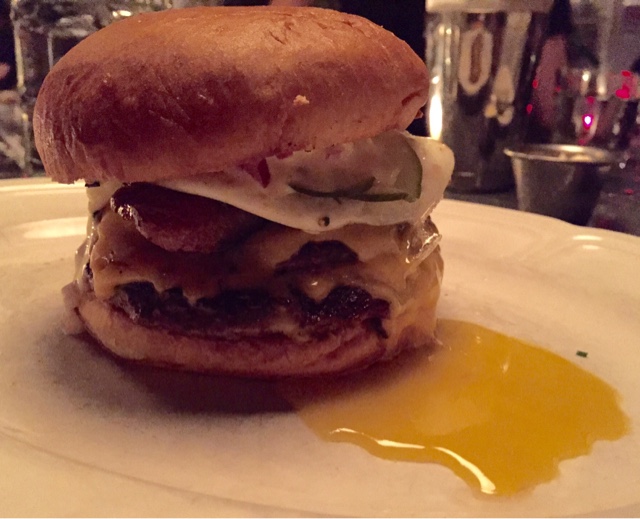 And just as the Little Goat walked back toward the Loop, so did we, after successfully eating everything in Chicago. 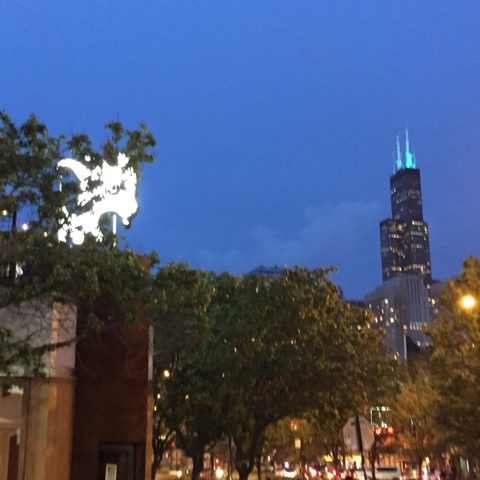