Skip to content
Finally landed after a few weeks of hopping around for work and play. First came Minneapolis, then Chicago for play which turned Windy City for work, then finally a few days at the beach with the chap in order to unwind and start the summer off right.
All I’ve done is eat and drink truly indulgent things the last few weeks err months. Funny how getting comfortable in a relationship can make you just a smudge too comfortable in your own skin and just in time for swimsuit season. Now that it’s a new month today, with few plans I decided to cut out the booze and carbs and get back in shape. My carrot dangling in front of me is a jaunt to Miami that I’m planning for the Fourth of July so that I’ll HAVE to get in shape. Awesome.
So on my first sugarless day, I’m recalling the most amazing dinner I’ve had out in ages. My company booked Rick Bayless’s private dining room and television show kitchen. Our night started with a walk through three of the restaurants’ kitchens, a glimpse at Bayless dining himself at Topolobombo, and a five course meal by one of his protegeès. Heaven.
The private space was called “The Library at Topolobombo” and I was all school girl giddy as food and library worlds collided around me.
I adored the casual vibe of fun table vine of blue glasses, gorgeous flowers, and bright walls lined with hundreds of cookbooks and photographs. Those shelves in the background of the photo contain the largest collection of Mexican cookbooks in the U.S. 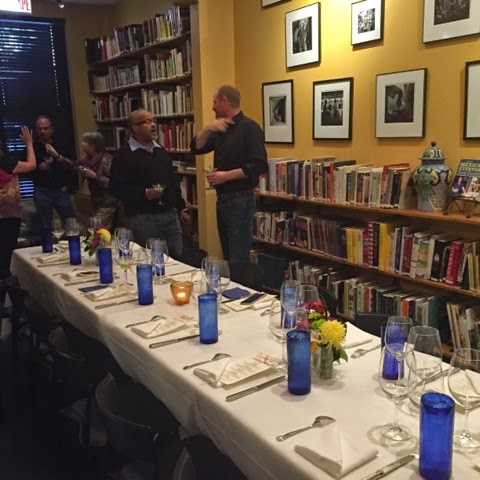 I’d love to copy cat this style around a kitchen table one day. 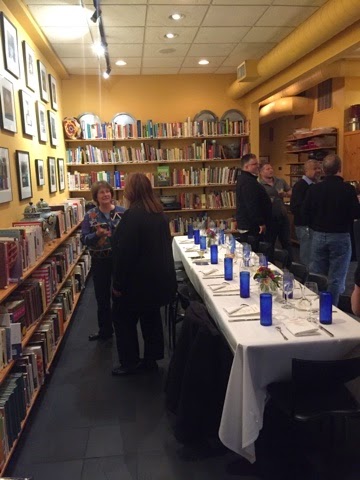 Amongst the books were Mexican treasures, like these happy guacamole bowls. 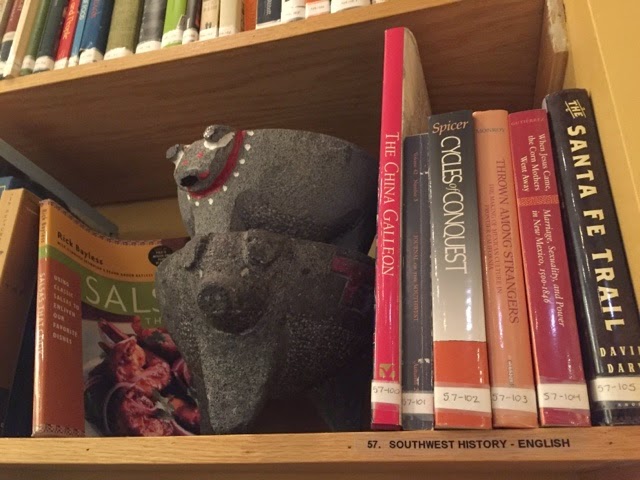 The walls were covered in gorgeous black and white photographs from trips Bayless has taken to Mexico with his staff. He does one every year! 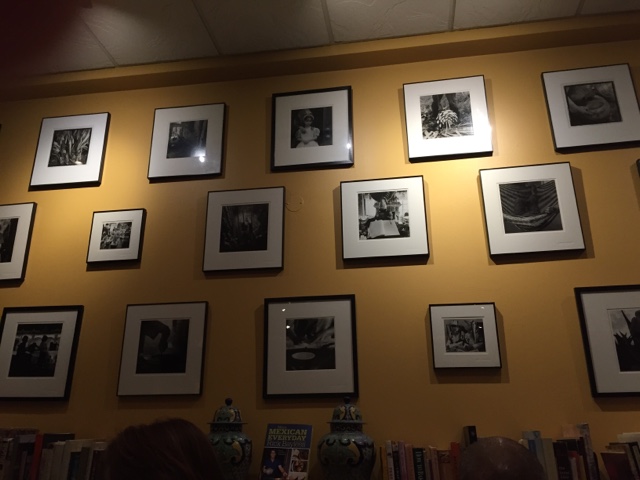 I’d arrived a bit later with two colleagues I’d been having aperitif hour with (thankfully, as I was able to catch a glimpse of Bayless)…so I missed a decent shot of spicy guacamole and margaritas. I assure you both of my favourites were delicious. Here’s a glimpse at a pitcher of pre-made margaritas that were poured into a cocktail shaker and shaken with the lime as a lid for the ultimate in Limey-ness. You may find this at one of my dinner parties soon as well. 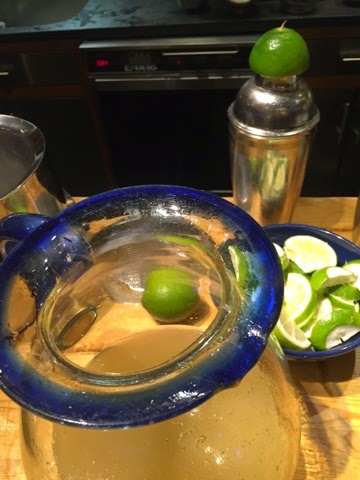 The kitchen was bustling and I began snapping photos before I ever had my coat off. 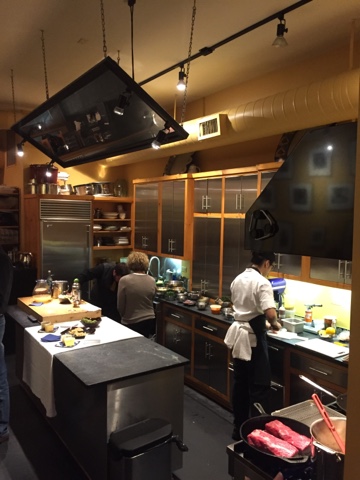 The browning of meat was in full effect to ensure it had a properly long rest as we ate. 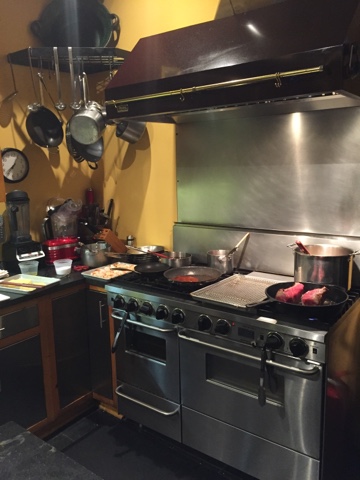 The mis en place game was on pointe. Immediately, I felt a need to buy metal bowls in every size. 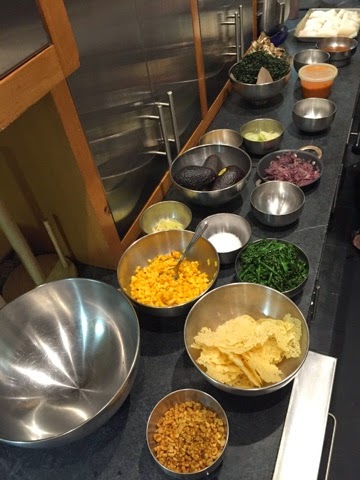 Meet chef Jim Ortiz, how cute is that smile? He’s hacking up a massive bit of foie gras while he humours me. 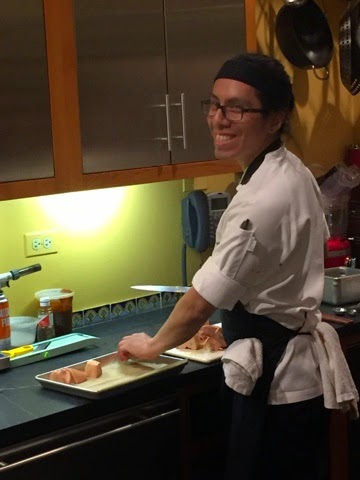 Shrimp for the first course and an already resting fourth course. 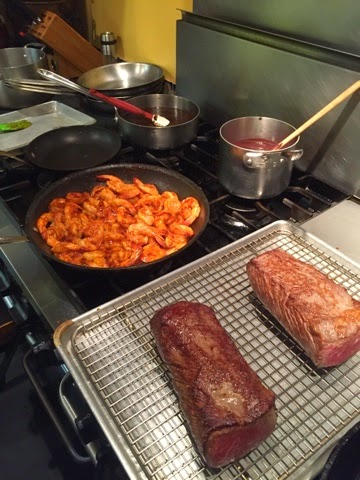 Our personalised menu and last of the margaritas. 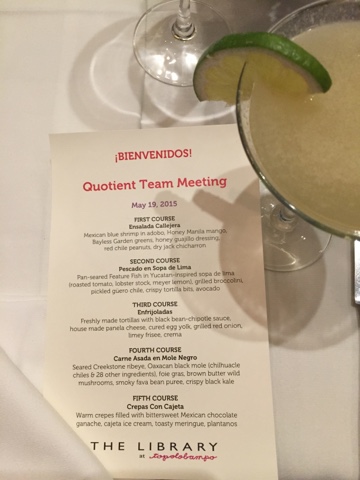 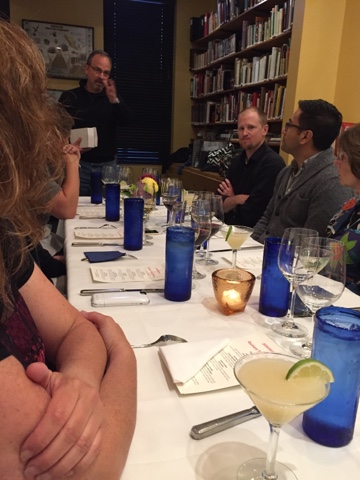 First course: spicy shrimp on a bed of roasted corn and mango. This was somehow a take on street food and was topped with greens and Parmesan crisps. I could eat this on the daily. 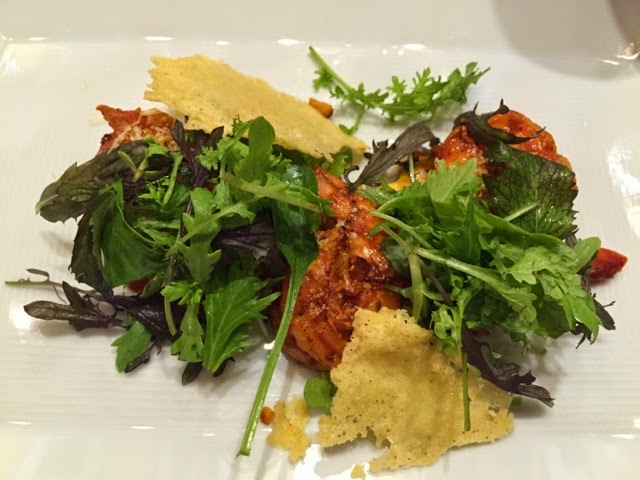 Chef Ortiz explains his inspiration for all of the dishes. Don’t you just love him? It turns out Rick Bayless takes $1 from each bottle of wine his restaurants sell and put it toward a fund of sending Mexican-Americans to culinary school who wouldn’t have otherwise had the chance. Chef Ortiz was one of those students, so naturally our sommelier encouraged us to drink lots of wine…for the children. We had our way with a surprisingly dry German Reisling and a lush Zinfindel. 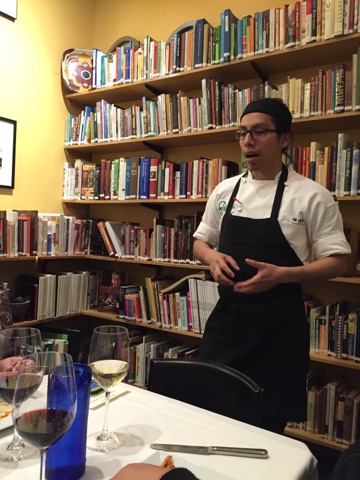 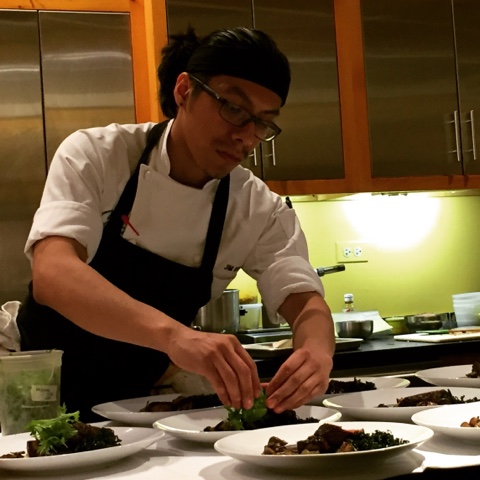 With the help of a few servers and to my great pleasure, in view via a mirror on the ceiling. 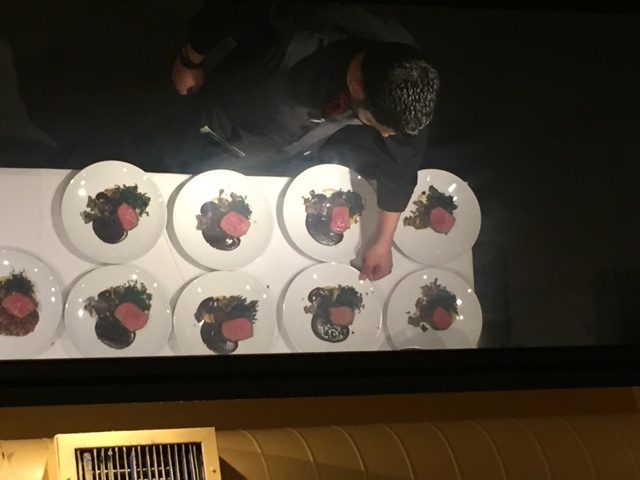 Course two was a fish soup full of lemon peel and brocolli raabe. Another win. 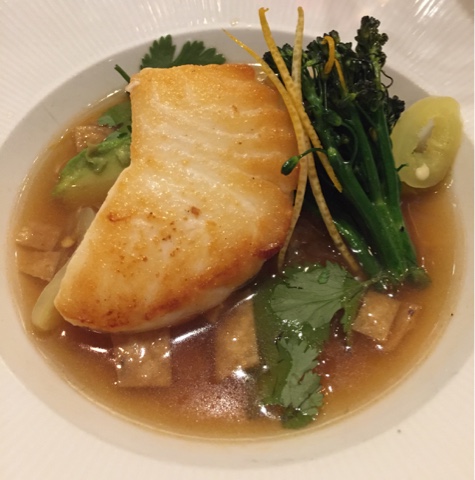 Course three: homemade cheese sandwiches between whole wheat tortillas and covered in black beans. Anyone who knows me knows my disdain for beans, but when in Rome, I ate it anyway as he’d just finished making the cheese before we arrived! Chef Ortiz explained that his grandmother used to make this for him as a child. Aww. 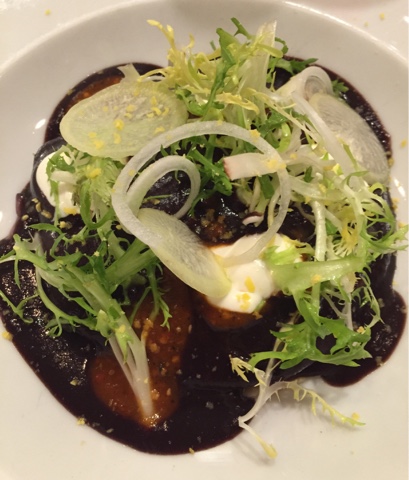 Course four: barely seared pork loin with a 28 ingredient molé, fried kale, and a hunk of foie gras. Nice and light. It was incredible. 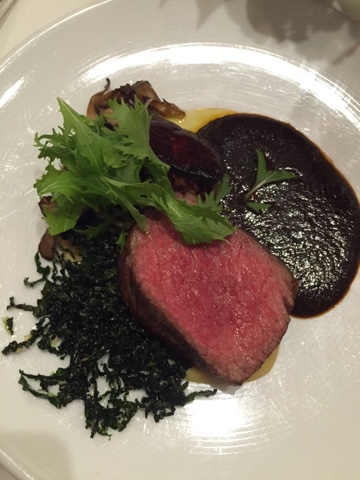 Course five: Carmely crepes with ice cream. Everyone about died over this dessert. 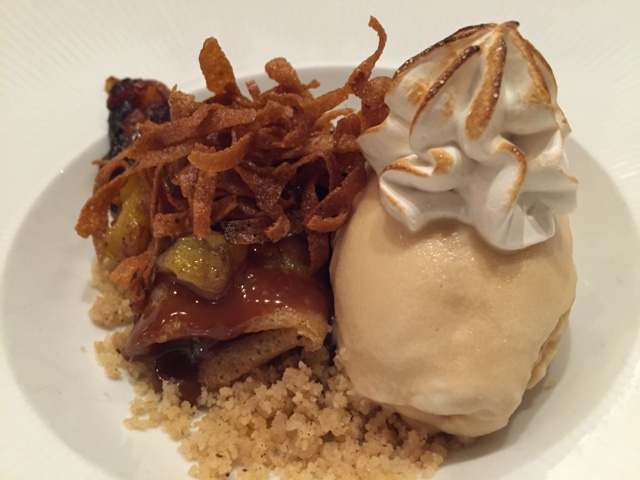 Naturally we were stuffed, so the chef through some homemade truffles and jellies down our throats and rolled us out of there.
Because I’m an instigator and because there’s a bar next door I’ve been dying to try since Bacardi was trying to make them a key account, I rounded up a band of misfits to test drive Three Dots and a Dash.
Cool vintage tiki bar vibe complete with a wall full of human skulls! 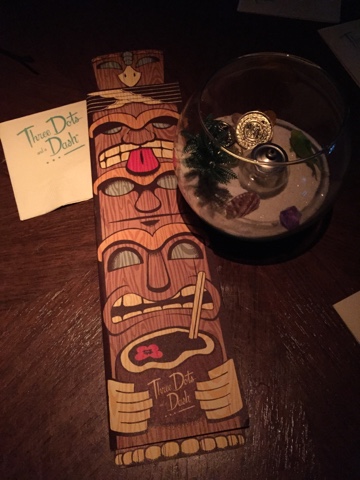 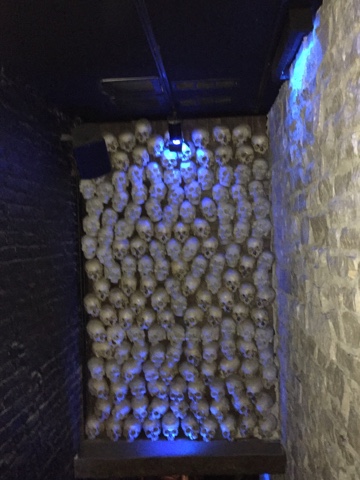 This 10 ingredient Painkiller was exactly the kind of drink you never need, but particularly after such an indulgent meal. It was tasty, but our waitress was rather bitchy. I’m glad I tried it, but probably wouldn’t return. 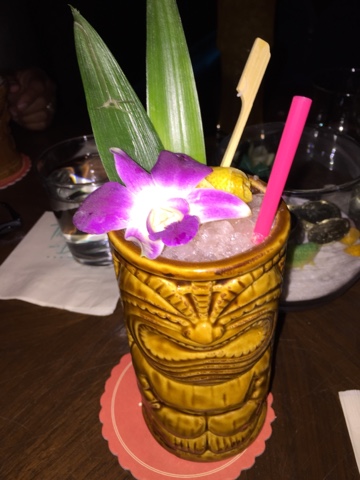