Skip to content
The chap’s recent dinner party coupled with the insane stretch of time on my hands in between gigs has me inspired to do about not much else other than cook and bake. The original plan was to get super in shape with my three weeks off or convince my friends or chap that taking a last minute tropical or Euro jaunt was a great and financially sound plan. Fail after fail. Even my most posh, adventurous lady friends were down for the count! I seriously contemplated booking something exotic alone, but then I’d just want to repeat the experience with someone I love since I love to share. I also didn’t even get tipsy enough to buy anything inappropriate (ie: Chanel bag) online. Instead, I bought a $60 roast and had my way with it around the kitchen. Ok maybe that was a little inappropriate, but it made 10! meals.
I buckled in for a day of cooking, baking and prep. The best day for such an adventure is when you’re dog sitting a rambunctious puppy alone for the first time, so that’s precisely what I did.
Here’s the fancy as f@$! menu that I made for the chap. He had to work and completely missed all the messes I made and got a delicious meal to boot – lucky him!
Fancy as F@$! Menu
Savoury Sablès (homemade ham chips, aged cheddar, chives)
Standing Rib Roast Stuffed with Bacon and Spinach
Potato Purée
Root Vegetables Wrapped in Bacon with a Maple Cider Glaze
Sticky Toffee Pudding with Vanilla Ice Cream
Here’s what the day looked like in photos…
The day prior, I dehydrated the hell out of some Easter ham as part of the salt component of the sablès. Easy enough, but not worth the trouble, although I suppose the salt concentration works well for helping folks drink their way along aperitif hour. So I started by making the dough for the sablès. Don’t they look like festive turds! 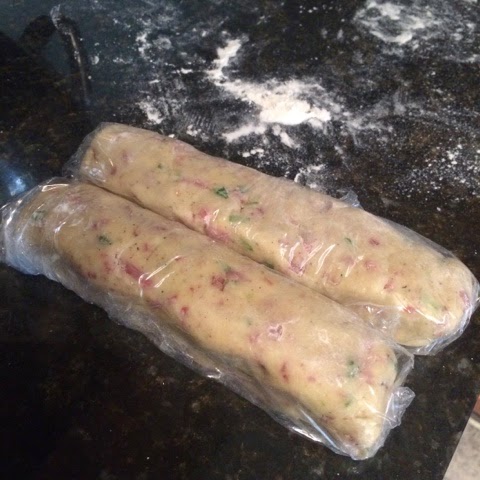 I failed to buy parchment paper for baking them and the chap lost his Silpat in the parking lot (standard pro problems) so I actually baked our appetizer the next morning for brunch. The recipe was from David Lebovitz’s “My Paris Life.” Rather delicious, but I prefer his Gougères and will probably move forward in life with those as the flavor profiles are so similar.
Here are the sablès baked golden brown and ready to enjoy with a glass of wine. 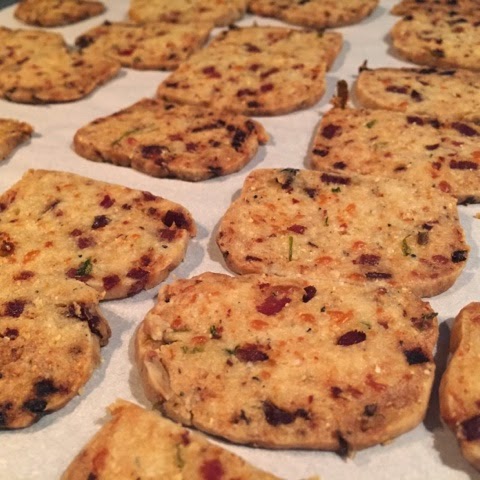 Next up was the stuffing for the rib roast which was resting for four hours. Being a standing rib roast is exhausting.
First stuffing component was the homemade French breadcrumbs. 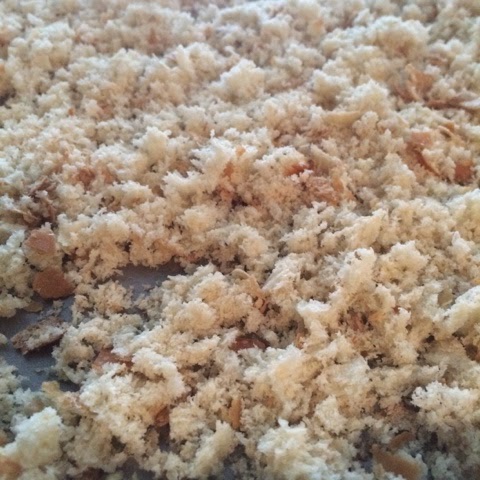 As mentioned, I was dog sitting for the first time throughout this endeavor. Brady passed out early. I’m not sure if he was taking after the roast and resting or if he merely Succumbed to the sweet melodies of my kitchen raps/Lana del Ray ballads. He looks thrilled so we will assume the latter. 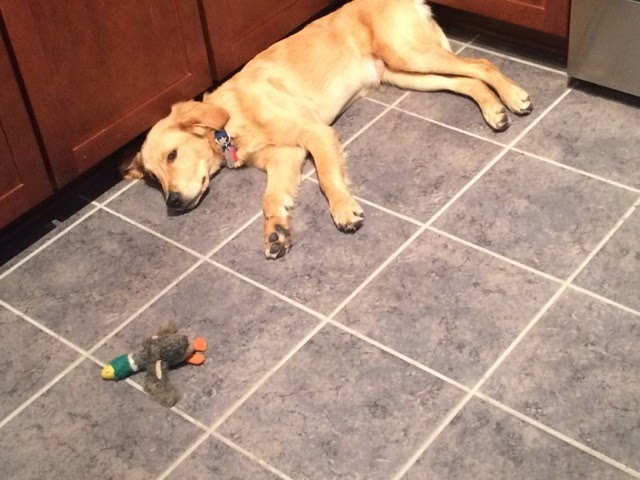 The next stuffing component was half a pound of applewood smoked bacon that you chop in a food processor. Never done that before, pretty kinky and effective. 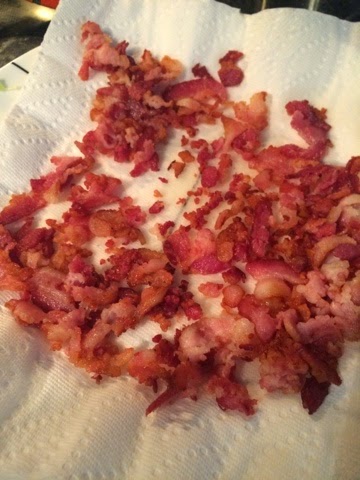 After sautéing the bacon to brown but not crisp, drain it and throw in shallots, garlic, and celery. Sauté all that mess covered in the bacon remnants (grease drained) and wait for magic to happen. 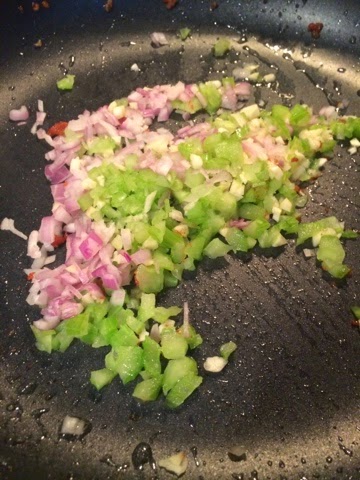 It happened. Throw the bacon and veggies together with the homemade breadcrumbs, spinach, and a couple of eggs. Refrigerate for a couple of hours so the flavors can serenade one another.
My sous chef woke up for this part. Sous chef est très sous pied. This is my favorite photo of anything I’ve taken in awhile. Some of my favorite things – dogs, eggs, spinach, flip flops, cooking. Some of which are Adorable. 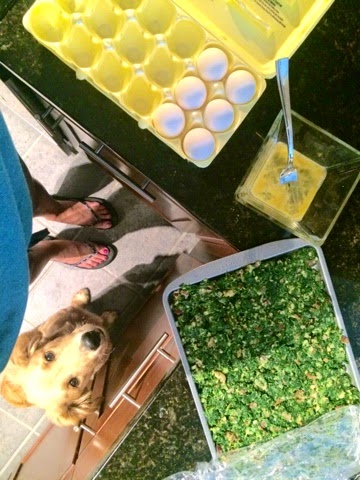 As I decided to read through the recipes and figure out what needed prepped next, Brady decided to pass out on my foot. The chap says he’s dominating me with this trick, but I know it’s because he loves me (and my singing) so much. 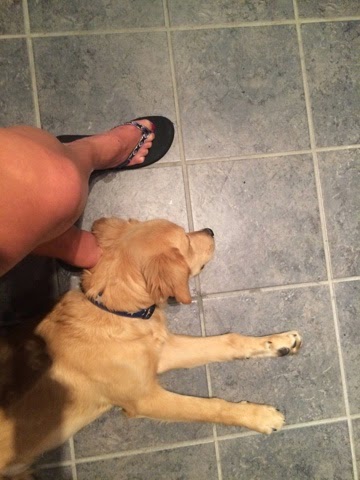 The standing rib roast is laying down on the job, taking a cue from Brady! How gorgeous is that?! Six pounds and $60 later, thank goodness I cut the recipe in half… 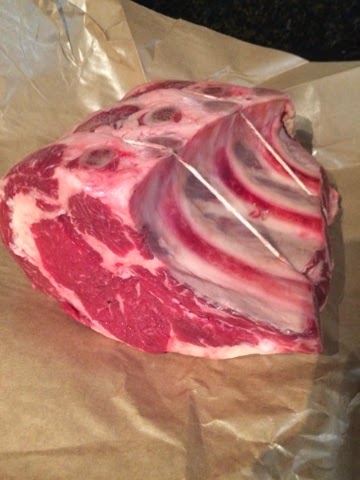 Turns out that rib roasts require a lot of foreplay. You have to salt and pepper every inch of them. Then, sprinkle with fresh thyme which you painstakingly destemmed. Then it’s a massage with olive oil. When it’s finally ready you stuff the hell out of it with what appears to be an aggressive amount of stuff. 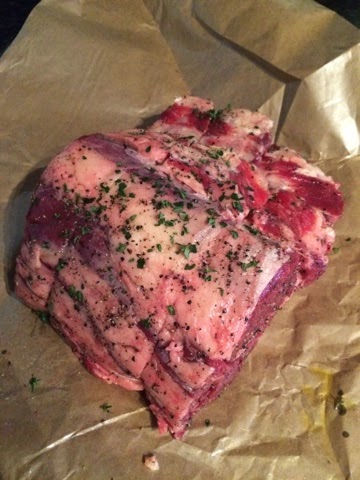 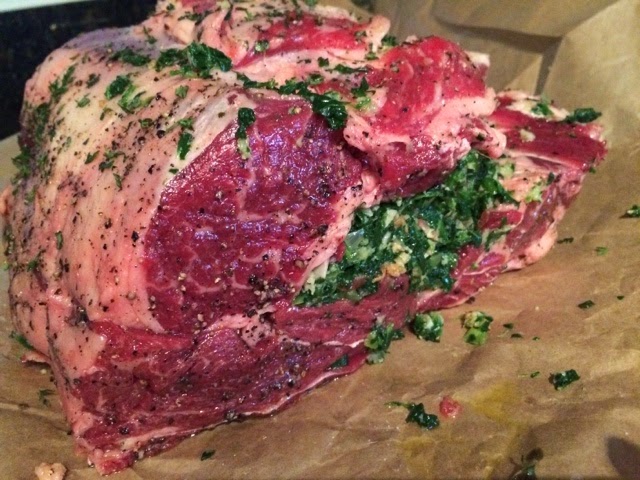 And because bondage is so hot right now thanks to Fifty Shades of Gray, you tie it up and tuck it (into the oven). That’s what she said. It sleeps for 3.5 hours and…. 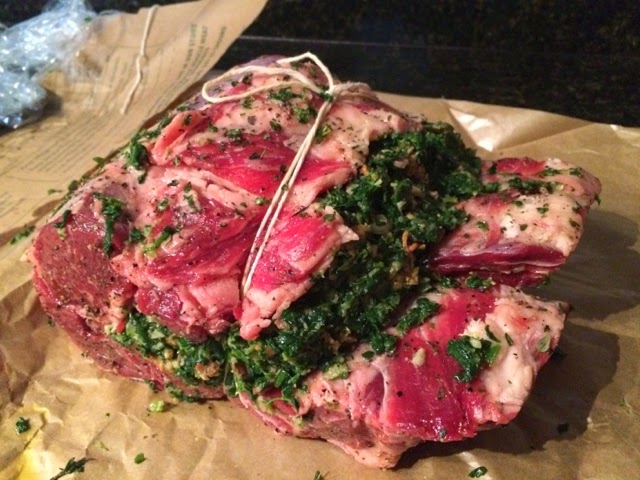 …Voilà! The damn thing never stood, but that didn’t seem to matter too much. 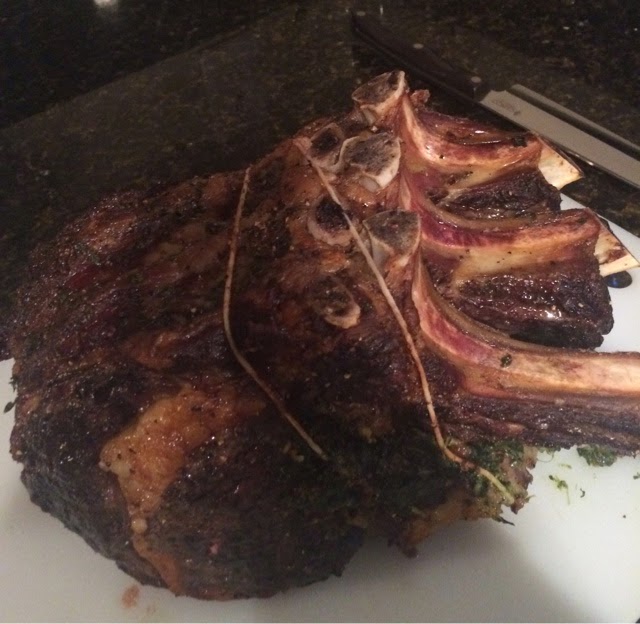 Again, because being a roast is exhausting, the thing has to rest for up to an hour!
In the meantime, we needed three pounds of potatoes for the purée. I hope this is the first time anyone has weighed tubers in a bathroom of a one bedroom apartment. Brady was so confused with my taking food into the bath. And as you can see the potatoes came to 4.4 pounds, not the 3 I needed. Of course I used them all anyway, but at least I knew what I was working with and didn’t change any of the other ingredient ratios accordingly. Oh, and I know I could have weighed and “tared” the big bowl at this point, but I’m not Walter White so I didn’t. I was also probably drinking wine at this point so elementary chemistry is out the window. 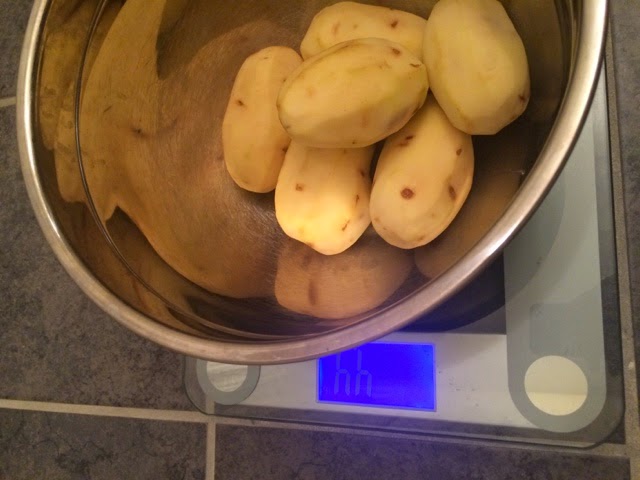 While you boil the potatoes, melt a mess of cream and a cup and a half of butter. Yeesh….
This was also a David Lebovitz recipe and I’ll never make mashed potatoes another way again. Butter is amazing. I say this to cardiologists everywhere. 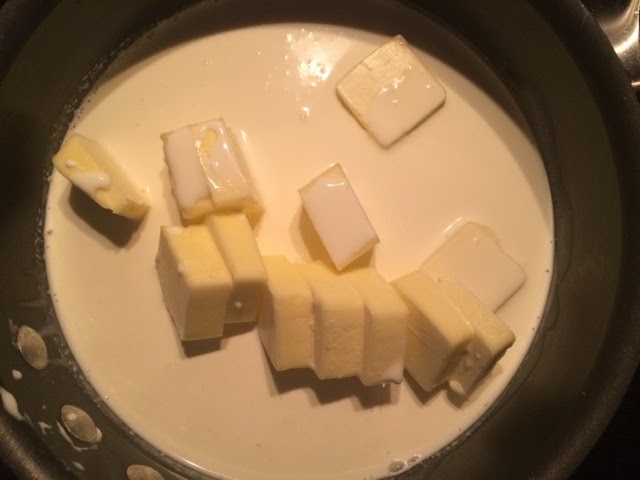 I almost made the vegetable without bacon or butter, but thought better of it. I took asparagus, parsnips, and carrots, (attempted to cut them the same size which was a total pain in the ass) and then wrapped them with bacon bows. After they roast for a while, dump some maple syrup and cider glaze on them. I loved these. Expect them at the next Christmas I host. 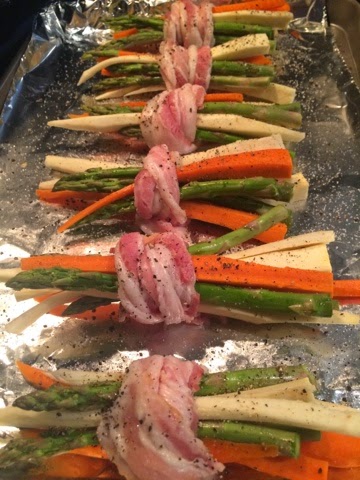 I worked for a day and a half on this meal. It looks so simple! It was sooooo good if I do say so myself. 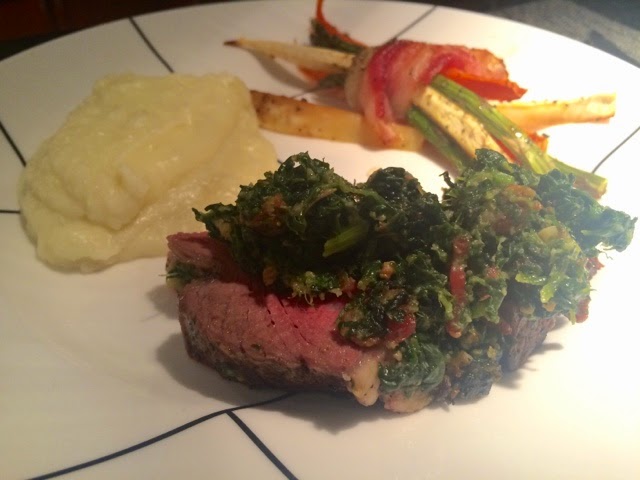 Despite my gratuitous swearing and rapping, I’m a sweetheart deep down, so in that spirit I made a dessert especially for the chap – sticky toffee pudding. He raves about one particular restaurant’s recipe that I’ve never had…and l’ve been to England maybe seven times now, but Have never eaten this! I didn’t know what it was supposed to taste like, how gooey the whole thing was to be, or the consistency of the cake. The attemot was rather confusing going in blind, so of course I turned to David Lebovitz for this recipe too – he’s basically fail proof.
The cake looked like this unattractive blob. The flavor was “meh.” Crap, maybe I did feel like I was in London. 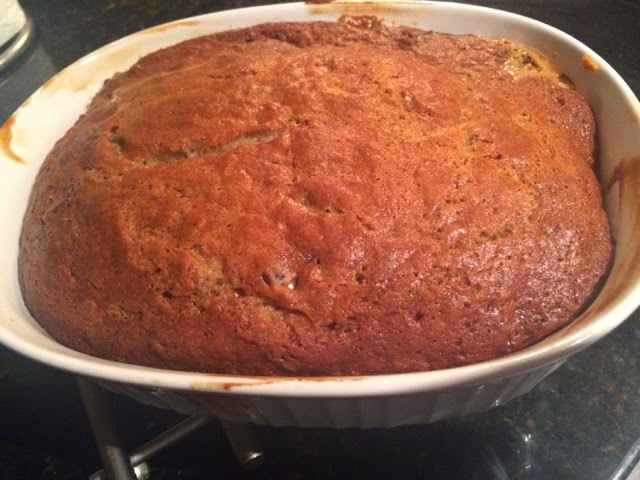 The result finished with homemade toffee sauce (which was boss) and vanilla ice cream was a bit better…but not great. I need to do some field research before repeating this dessert again… Chap seemed happy enough, but maybe he needs some field research too. 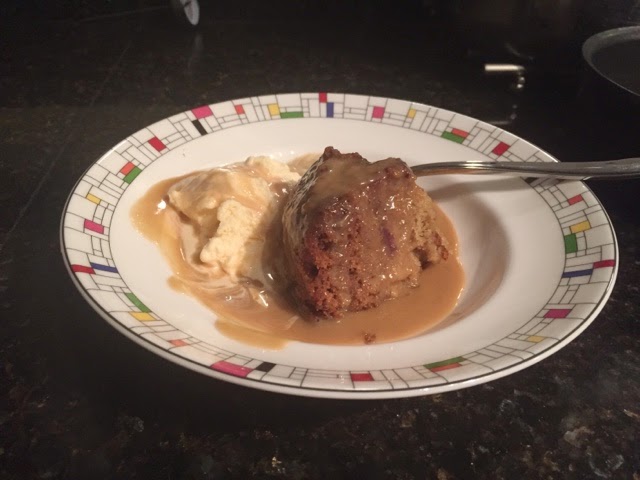 I think we all enjoyed the evening as the chap and his trusty pup (a lousy sous chef) both passed out early in the night, hopefully in a satiated food coma.
Until the next fancy as f@%! Endeavor…