Skip to content
The gentleman friend (who I suppose I need an unassuming pseudonym for) is out of town this week so I decided to take the time as a much needed kick in the pants- running, healthy cooking, no booze, etc.
My first generally healthy new recipe for the week was Ina Garten’s mustard chicken. I served a simple romain, cucumber, and mozzarella underneath for added crunch. I assure you that although the chicken looks pink in the photo, it was properly cooked and did not have salmonella. The chef guy in my life tried it before he left and declared it, “good chicken.” Not mind blowing chicken. I’d have to agree. 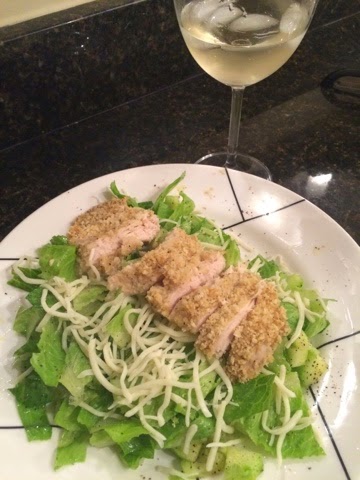 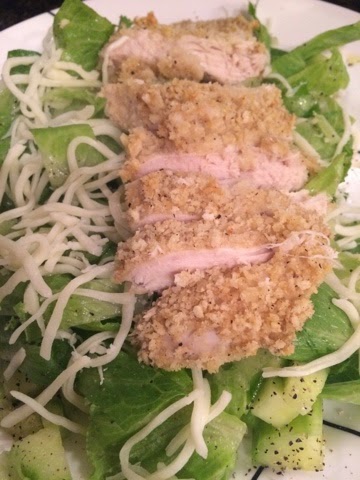 The recipe was simple enough. Take 1.5- 2 pounds of chicken. Pat dry. Salt and pepper those breasts and pre-heat the oven to 350.
While that’s happening, take a bowl and mix 1/4 cup of Dijon mustard with 1/4 cup of dry white wine.
In a small food processor, mince two cloves of garlic with salt and pepper. Add a cup of Panko, a tablespoon of lemon zest, a tablespoon of olive oil, and a tablespoon of melted butter. Pulverise that.
You then dip the naked chicken in the mustard mixture, then the recipe says one side in the crumb mixture. If I make this again, I’ll crumb both sides and double the crumb mixture because meow bread crumbs is always the way to health.
Toss the chicken in the oven and bake for about 30 minutes. Then turn up the heat to 450 and bake about 10 more minutes until it looks right.
You’ll want to continue to drink the White  wine you bought for the chicken. But since you can’t plan anymore and just bought it ten minutes prior and couldn’t have possibly have been chilling it- it’s going to need ice cubes. So toss some of those into your classy, haphazard monday drink.
I’d try this recipe again sometime, but I’m not excited about it. The chicken was on the verge of not moist enough, but the breadcrumbs had dredging juices gave the bird an awesome, multi-faceted flavor. All in all, a Monday night of a dinner.