Fresh off of my first Tinder date, I couldn’t decide whether ‘depressing’ or ‘infuriating’ is a more apt word to describe the experience, so I thought rather than settle on one adjective, I’d start a new series of dating misadventures called “Tinder Night Terrors.” Because “Tinder Nightmares” is a monicker already taken on Instagram.

But first, let’s rewind a few months….
My work husband was on the Tinder app for the first time with dangerous parameters such as 22 year old women. We farmed through the sorority girls on breaks between  work projects. It was so funny to see what photos people were willing to put online, that his account eventually became my job. He wouldn’t even look at it and I would choose girls for him. I’d even have full on conversations with the girls (from his phone, naturally) and would wait on the edge of my seat until the next time they might send a slutty or depressing photo directly to him. I knew what my competition looked like and if I was ever to be single again, I figured I was a-okay. Amid all of my mucking around with his account, he managed to meet a very nice, cute, professional girl. They’ve been dating exclusively for a few months. Tinder was entertaining AND hopeful!
So would have guessed!? (Wait, I did). A few months later I found myself single. After waiting the appropriate period of sad/mad/indifference (5ish weeks) I decided to download the app. Instantly, I couldn’t get enough!
This was three days ago. I started by reading all profiles and viewing all photos, mostly to send to my friends out of amusement. Then, I moved to first photo judgement. There just wasn’t time for so much sleuthing! When a chap made a decent enough first impression to dig deeper, I could easily ‘x’ him on the criteria of visible tattoos, photos with guns, dudes holding fish, unironic facial hair, and piercings. This was basically online shopping for a boyfriend and my cart was hustling down the aisles! I’d love to know how many dudes I gave the cold shoulder to…I narrowed the pool down to about forty prospects. Instantly, I started messaging with maybe a dozen. It was SO much fun! The attention, the texting, the date invitations. It was enough to make a girl dizzy…until I had my first Tinder date.
Steve (32) and I messaged for several hours one night. We talked architecture, family, travel, and decided to meet for a drink. See, if you saw Steve’s photos, I think you’d be excited too. Handsome face (photo redacted for anonyminity), abs that maybe you want to put your mouth on (featured below), and some travel pics. Steve was a catch! (A catfish of a catch?) 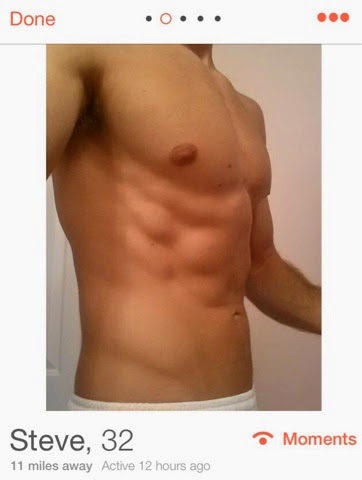 I don’t usually date “hot” guys with physiques like this. I go for guys who have some substance to them because I want someone to drink a bottle of wine and eat a bowl of pasta and not feel like a fat ass. Steve was not that guy. I put in a double workout yesterday and focused on iced coffee as sustenance today so I would be properly dehydrated for our date.
I should have skipped the gym and doubled up on fro yo toppings because it didn’t freaking matter.
Steve had me meet him at a sports bar I happen to find dirty and tacky. I brushed this off a low key guy stuff and at least there was no pressure. It’s near my office so Steve said to let him know when I was leaving work and he’d meet me. I thought, “Steve certainly has a flexible work schedule…but this sure is convienent!”
When I arrived at the shitty sports bar for a first date, tackily named Fox and Hound, I was surprised to find Steve standing awkwardly with the two hostesses. First red flag. Why hasn’t he sat at the bar and ordered a beer? Oh. And he looked nothing like his photos. Second red flag? I’m pretty sure those might be Ryan Gossling’s abs. He also tragically wore running shoes with jeans and a button down black shirt from Chandler Bing’s closet, circa 1997.
Of course I played nice! Steve had invited me out and I’m gracious enough. Steve took me to a sports bar and ordered a menu, which was confusing. I had a Stoli and soda while Steve had a cider which was more confusing. Before Steve could aske me how my drink was, Steve told me that he had family money and didn’t have to work. Ummmm ok? Steve is tacky, got it. (Also, rich people never say “I’m rich.”) So don’t wear sneakers on a date and take a girl to sports bars, Steve! He also owned a small house ($130k, he offered) and hadn’t travelled. If I didn’t have to work, I’d like to think I’d balance jet setting to five star resorts with running a non-profit. Maybe that’s just the difference between me and Steve? He sleeps in, hits the gym (or “hot ab” google searches) and apparently doesn’t date much because boy could not hold a conversation. I dated plenty of dudes in Miami that didn’t have to work. They spent their days becoming charming, ladykillers, and were fun and interesting to hang around a nightclub table with! (Hmmm also telling). Not Steve  though! Basically, I spent the time interrogating him about, well, anything, and then asked him about sports since we were in a sports bar. Turns out, all boys love sports but Steve. Hmmm. Steve did managed to ask me if I painted my nails and <gasp> touched a fingernail! Ummmm duh! They didn’t grow in this trendy shake of pinkish gray!
I lied and said I was meeting friends for dinner so I was sorry I would not be able to walk around the shopping plaza with him. WTF!? The barman stupidly asked one check or two. I thought I was doing the polite thing and feigned for my wallet saying I could get my drink. Steve said OK. Catfish, I-don’t-need-to-work-and-I’m-Certainly-not-dating-classy-broads-but-maybe-now-is-my-chance Steve let me pay for my $6 drink. $6!! I almost wish it was more expensive like in a he-doesn’t- owe-me-anything-this-is-a-hookup-website sort of way. Good luck, Steve!
After that I attempted to high tail it out of there declining dinner and “walking around” invites. Steve told me I was cute.   I might be pretty, I might be bitchy, but I’m not cute. At least until you know me. Steve will never know me!
The highlight of the evening was that the shitty sports bar was near a Target. I had a coupon for yoga pants and purchased q-tips on sale.
Tomorrow night…Jon.